faster just by moving to Hostaan

In our previous article on speeding up WordPress, we optimized the internal Wordpress components. This time we will focus on the external server performance and technologies.

Internal optimization of WordPress can be done, for example, by affecting on image size, removing older publication versions, trimming unnecessary add-ons, or using a lighter themes.

However, after these steps have been done, and if the results are still not good enough, the bottleneck for speed can then be a web hosting provider whose servers do not provide sufficient performance. So server performance and caching solution should be improved after the other steps haven been taken.

Sivuseppä is a digital agency that focuses on designing WordPress websites. The company is based in Tampere. Entrepreneur Mikko Mörö wanted to improve loading speed of the company's website, as this has affects positively for the conversion rate.

Fast loading speed is especially important for digital agency's website, as it stands as an example of the service quality for customers, so company's own website should open in an exemplary manner. 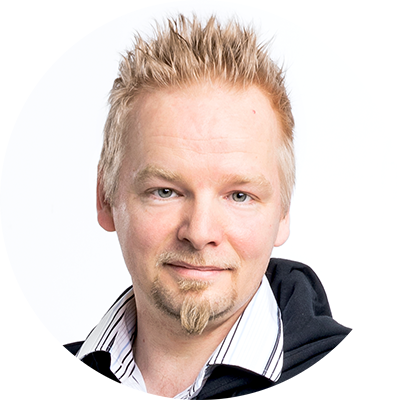 There was no much of a need for technical tuning on the Sivuseppä site, as it was already internally optimized. So the bottleneck for speed was solely the old server. We performed an indicative measurement of site speed using Solarwinds Pingdom Website Speed Test to measure front page loading speed. Of couse this method of measurement is a simplication, and tests could also be done a more sophisticated ways, but in this context it gives a sufficient and indicative result, focusing only on the server performance.

We measured a loading speed of 2.83 seconds with the site located on the old server: 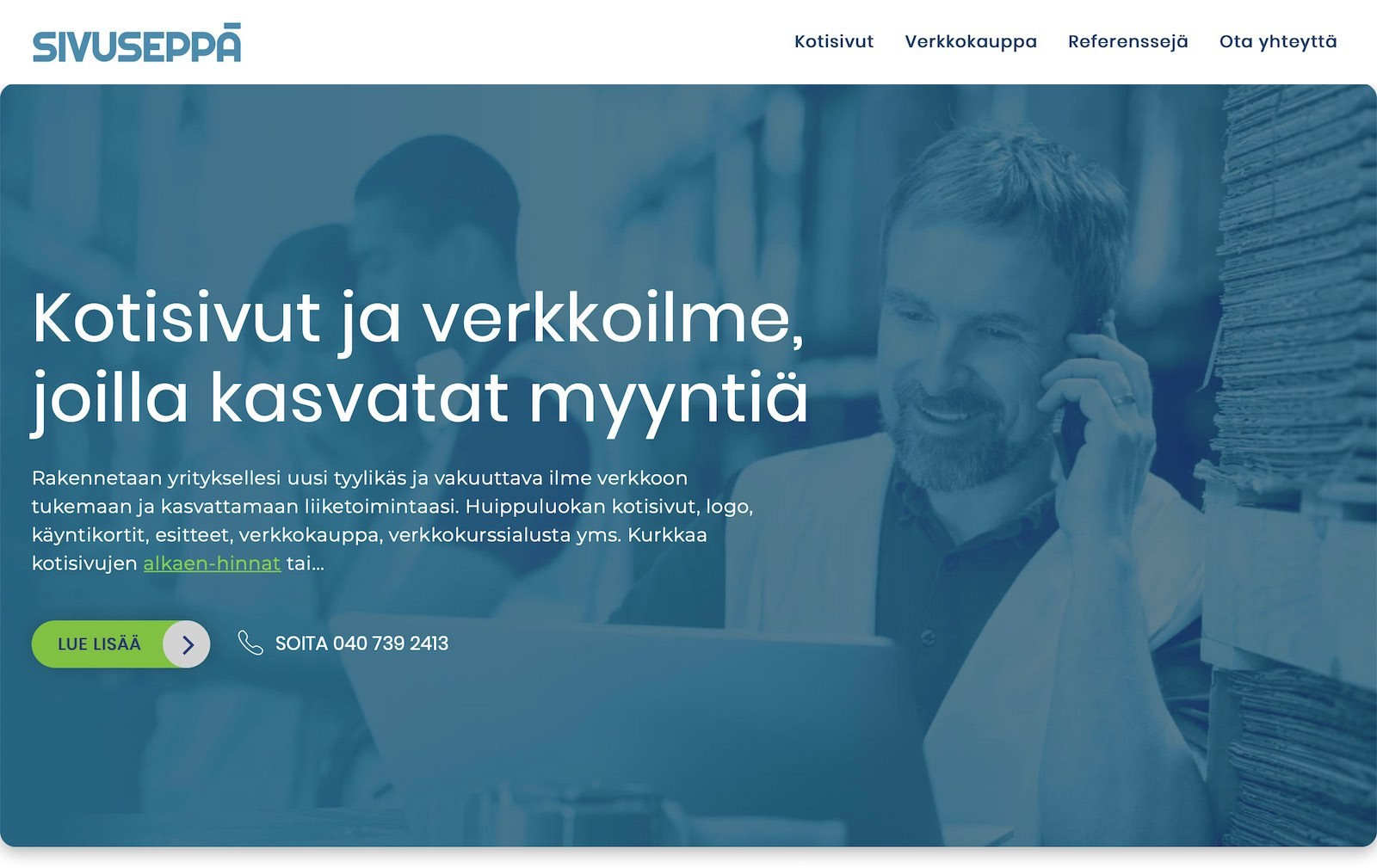 After the domain and site were transferred to Hostaan server as completely identical and withouth any content modifications, the test was performed again. This time the resuls was much less, only 1.52 seconds:

The mere change of server resulted in a huge improvement of about 1.3 seconds in the loading time of the website. This means that the site loads almost twice as fast. (Thanks to our excellent server technologies, but also world's fastest UpCloud service platform we use on every of our servers we host.)

Because the customer chose our WP Pro 5 GB hosting plan, that also includes Nginx Caching, we decided to continue speed optimization by deploying this cache in action. This caching solution runs on our server at the front end proxy, providing a faster server-based caching than any internal WordPress caching plugins (i.e. WP Super Cache, W3 Total Cache ja WP Fastest Cache), which mainly optimize files and store their content in static files. Nginx Cachingin has the advantage that the requests can be processed directly from the server's proxy cache before they proceed to web server.

After deploying Nginx caching the test made for Sivuseppä showed huge improvement - the loading speed of the front page was only 0.35 seconds. (Test was rerun couple of times and some results even went lower than this). 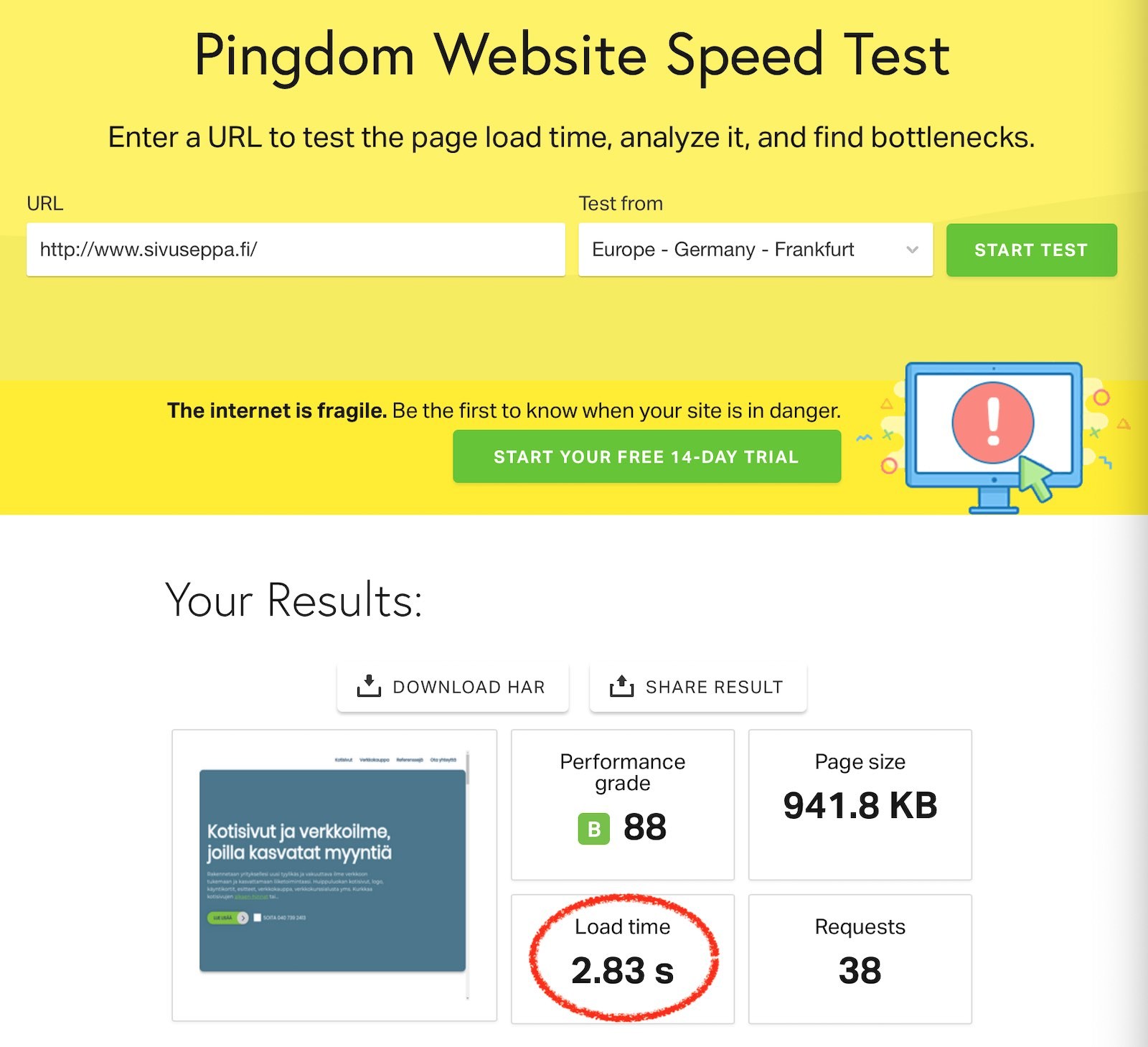 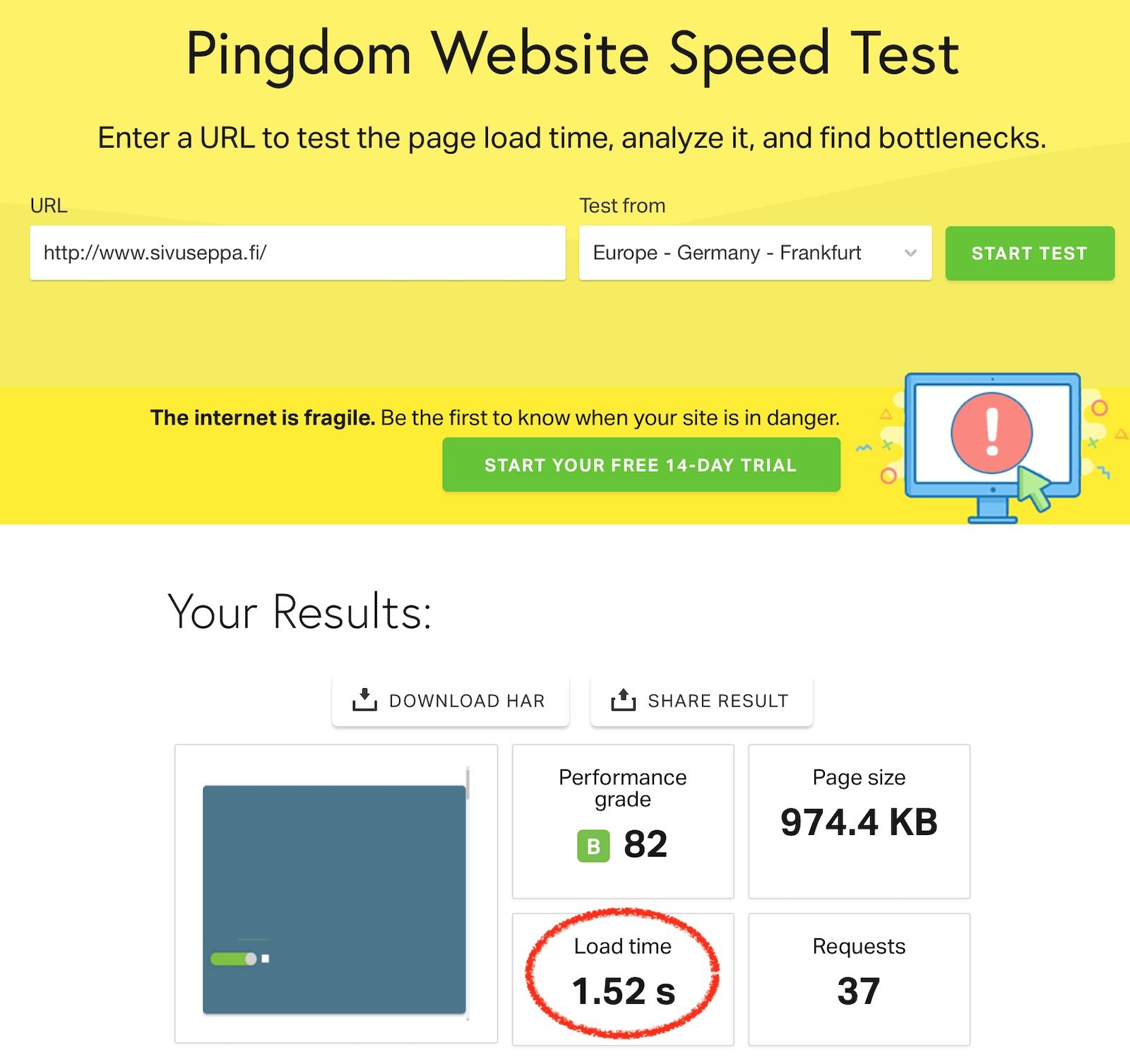 Tremendous improvement, would you say? The site loading time dropped from 2.83 seconds to only 0.35 seconds. It took only moving site to Hostaan and setting up Nginx Caching, that is provided as standard in all our our WP hosting plans. So this WordPress site started to work about 8 times faster than before.

Nginx server side cache stores static files in the server's Front-end Proxy, allowing queries to be answered very quickly - even before they reach the web server itself. This physical caching is a great complement to WordPress internal caching plugins (such as WP Super cache, W3 Total cache, or WP Fastest cache), as the static content they generate is stored at the Nginx caching on server level, enabling very fast responses to queries.

Also, it should be kept in mind that the overall loading speed of your site is also affected by other components, like content downloaded from external sources, such as fonts from Google's server, Font Awesome icons, Google Analytics, or Facebook Pixel. These all have a slowing effect on the site speed that caching cannot improve.

The tests were run from Pingdom test server located in Frankfurt, Germany. This was the closest geographical location from Helsinki, where customer's site was residing. So results may also vary depending on the location - in Finland the pages can load even faster than measured in this test.

In this case the speed improvement was so dramatic that it was also clearly noticeable when browsing the site, although this is a subjective way of measuring it.

Do you also want to speed up your WordPress website or WooCommerce online store? Check out our WP hosting plans and become our customer. 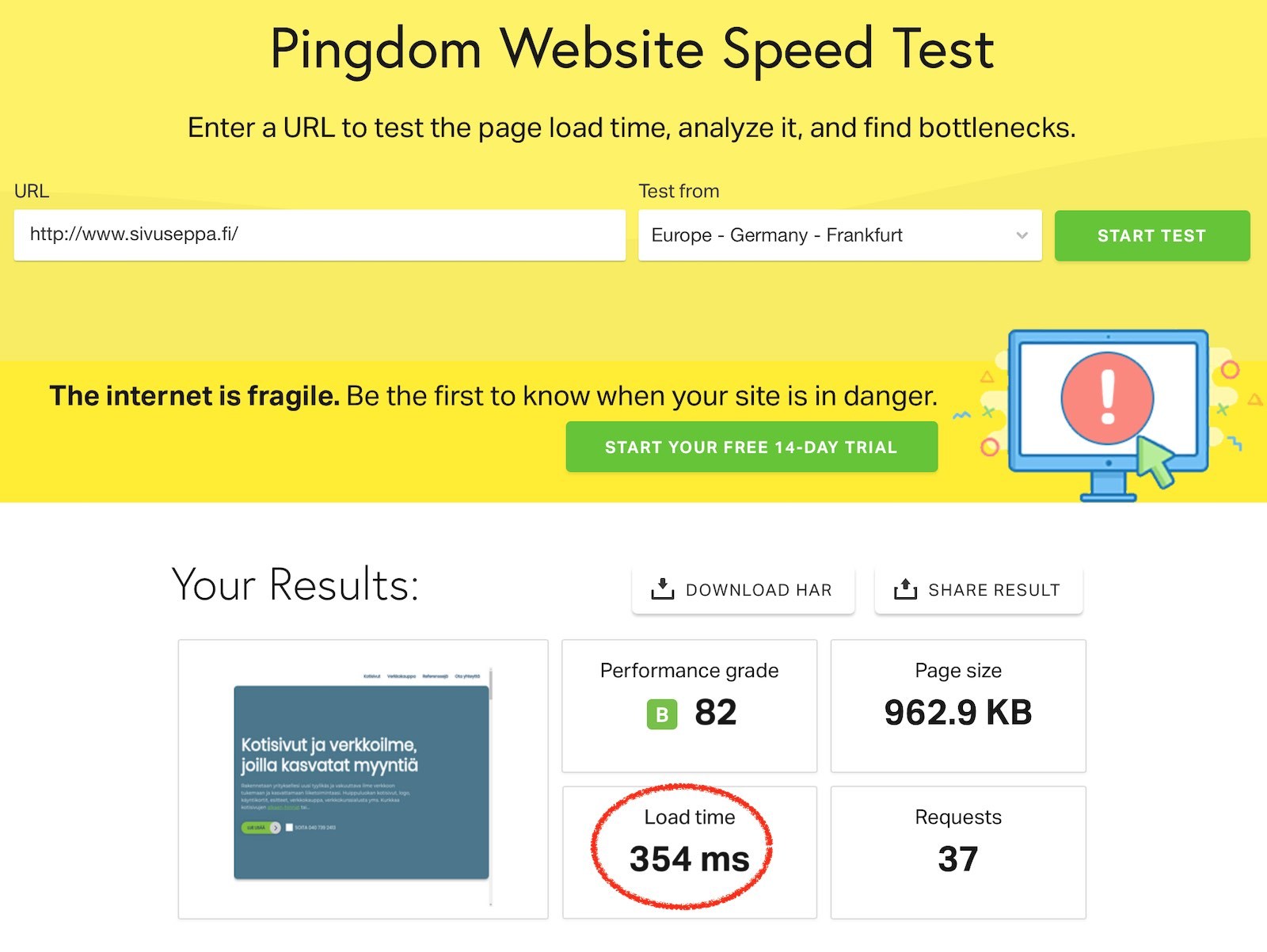 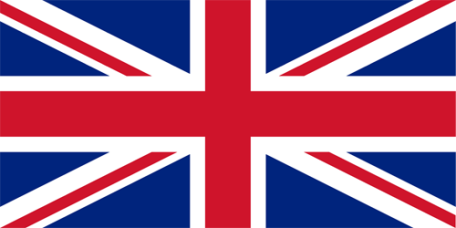 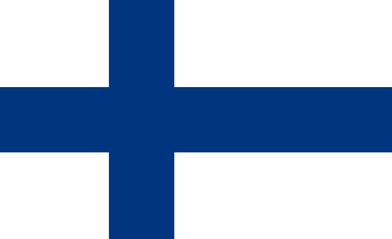 We are a Carbon negative company